Dent May - Live in San Francisco!

Last night we went to check out the self-proclaimed "unpopular" indie pop singer Dent May (whom Caroline discovered by accident on a trip to H&M some months back) and his band at Slim's in San Francisco.  It was a good show, especially owing to the intimate venue that Slim's provides, and it was fun to see Dent up close, even if we were in the running for being the oldest fans in attendance.  Caroline's only regret is not asking for a photo with the singer when she had the chance, spotting him as she did wandering the bar area before he took the stage.

As an unexpected bonus, Chris Cohen opened for Dent May, putting on a good show, and we enjoyed seeing a previously-unknown-to-us artist.
Check out my snazzy, limited edition Warm Blanket Tour Dent May wristwatch that I picked up at the show last night! (The bubblebath, which I will never use, was free with purchase).
We even had a nice little chat with Chris Cohen, who sold the watch to us during his stint at the merch table after his set and was sporting a New Mexico tee shirt with kachina illustrations screenprinted on it - such a nice guy!  He had no change, so we picked up a copy of his CD as well, which seemed to make him very happy.  Apparently starving musicians don't ask for much.
Posted by scott at 7:23 AM No comments:

The MSU Spartans Go to the Rose Bowl...and So Do We!

We returned home from our Scott-has-a-couple-days-off-from-work-so-where-do-you-want-to-go? road trip to Oregon on Christmas Day, feeling exhausted, but fulfilled.  After a mere two days at home simply preparing to depart on the next leg of our journey (we were only home because Scott had to return to work), we hit the road again on the Saturday before New Year's, heading southbound this time.  We always said that if (when, I mean when!) the Michigan State University (Scott's alma mater) Spartans were going to the Rose Bowl, then we'd be going too!  And then they went and did it!


Tickets were pretty hard to come by and plane fares exorbitant (thankfully, we were able to just jump in the car!) but several of Scott's old college friends were making the trip as well and it promised to be too much fun to miss!

We arrived in LA mid-Saturday afternoon and after a weekend of beautiful weather and sightseeing - admiring the modern design of the Walt Disney Concert Hall (from the outside), wandering (and eating in) Little Tokyo and Chinatown, visiting the Getty Center Museum and beachwalking in Malibu - we were excited to soon be meeting up with our friends, Jim and Laura from Indianapolis and Scott's childhood friend John, whose girlfriend Emma we'd be meeting for the first time.

Late in the day on Monday, we got settled into the beautifully renovated 4-bedroom mid-century modern house in the Los Feliz neighborhood of LA, near Hollywood, that John had rented from a work associate.  Much merriment ensued as we caught each other up on the goings on in our lives over the past ten years and after walking to a late dinner at a neighborhood Italian restaurant (which is hazy in my memory after all that wine), we hit the hay.
On New Year's Eve morning, we hiked to the Observatory in Griffith Park near the house with John, Emma and Laura, admiring the views from the top, while Jim went off for a "sightseeing" run on his own.


That afternoon, the six of us set off in Jim's rented SUV for the requisite sightseeing on Hollywood Blvd, followed by lunch at an oddly empty sports bar.


Since we would be getting up very early the next morning to drive to Pasadena for tailgating before the game, we spent a fun but low-key New Year's Eve at the house, cooking dinner with Jim and Laura, listening to music, drinking wine and watching Ryan Seacrest on TV, staying up just late enough to catch Robin Thicke singing his hit-of-the-year "Blurred Lines" (humorously dubbed "the "rapey song" by Jim) and to watch the ball drop.

As a special New Year's Eve treat, shortly after dinner, Scott and Jim's college friends, Todd and Nicole (whom we hadn't seen since their wedding in the '90s!) and their kids, Maddie and Josh, dropped by to say hello!

The Rose Bowl - tailgating as well as the game itself - was truly amazing!  Everyone, even including me, the biggest non-football fan there ever was, had such a great time and Scott was so incredibly happy to be there!  Our friend Jim, who was staying in the house with us was able to get four face-value tickets for the game from a friend in Indy who is a big donor and, luckily for us, was unable to attend the game. (So sadly for him, he was in Grand Cayman or somewhere equally horrible over the holidays).  Scott felt that we had some of the best seats possible in the stadium and there was nothing like seeing that sea of green all around us.

All the Spartan fans were so excited to be there, the energy, camaraderie and team spirit, both tailgating and in the stadium, was simply incredible.  I admit, I even teared up a bit at the end when they won the game.  And this, from someone who really doesn't care about football!  Of course it was especially exciting since the Spartans were expected to lose.  What an amazing victory!  And as a special bonus, it was really wonderful to see so many of Scott's old college friends too.  We decided then and there that we will definitely be doing this again, should the opportunity arise!  Let's go Spartans!


On Thursday morning, in a tired haze, we left for Oakland, just in time for Scott to go into the office for a few hours upon returning home.  In keeping with our typical whirlwind schedule, the following day, an old high school boyfriend of mine and his wife arrived from Michigan to spend the weekend with us at our apartment on their trip to San Francisco.  Unfortunately the visit was cut short, as I managed to fall ill with an intestinal ailment, which seems to be becoming an annual tradition with me.  Luckily, it was not nearly as bad as last year's episode in Korea but an unpleasant start to 2014 nonetheless.  We did have a bit of time to catch up even if I was unable to leave the apartment, so all was not completely lost. 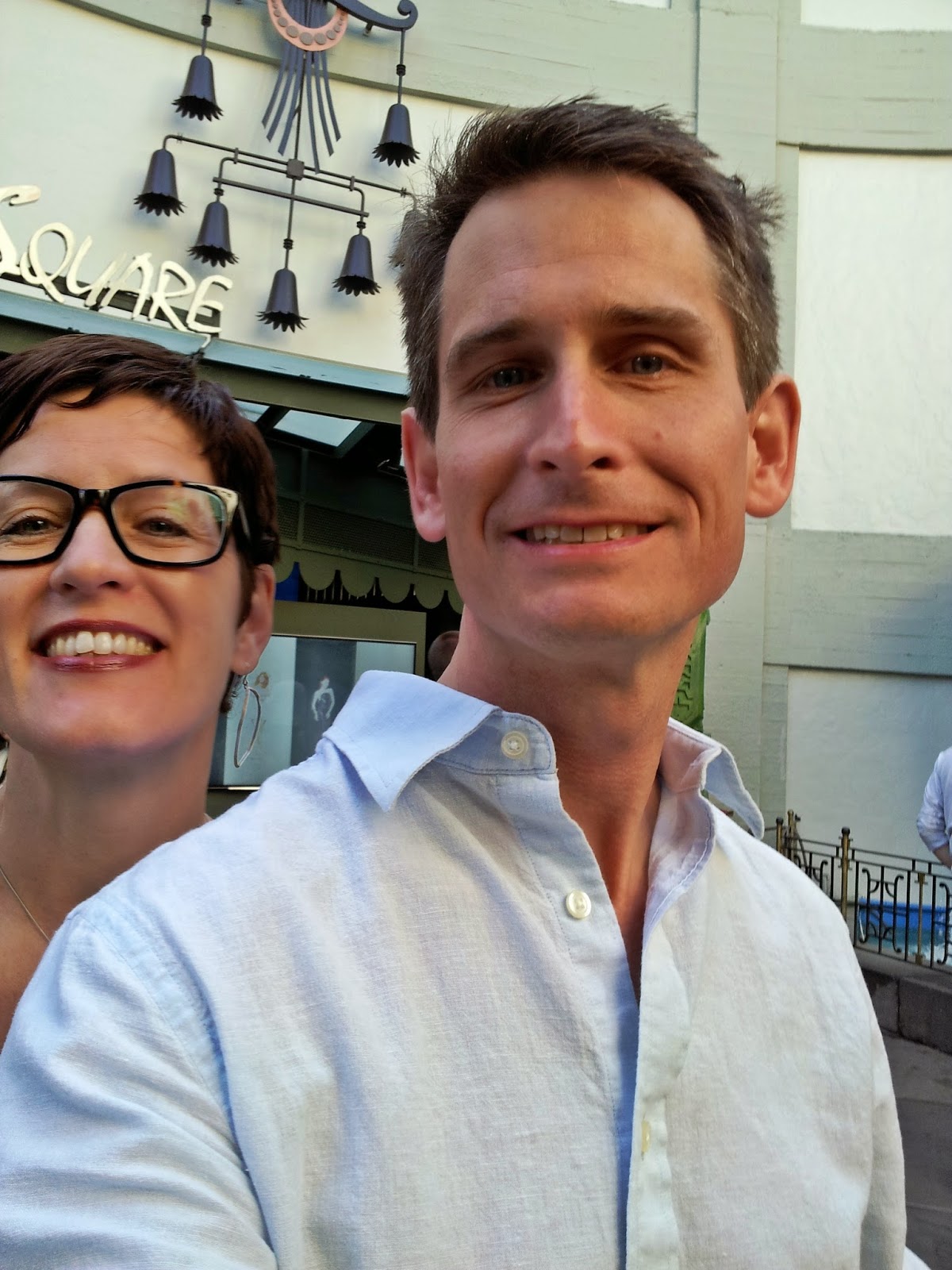 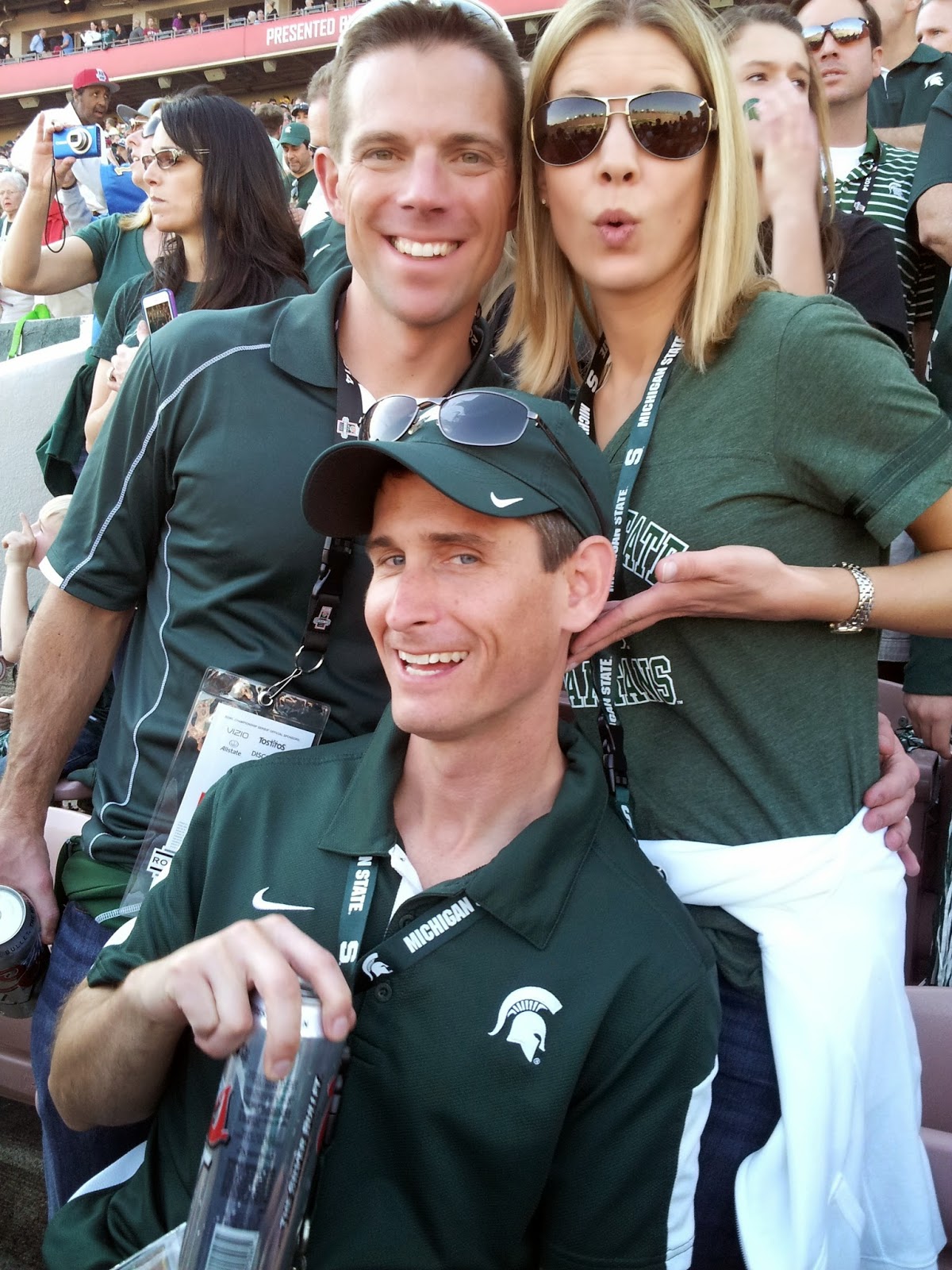 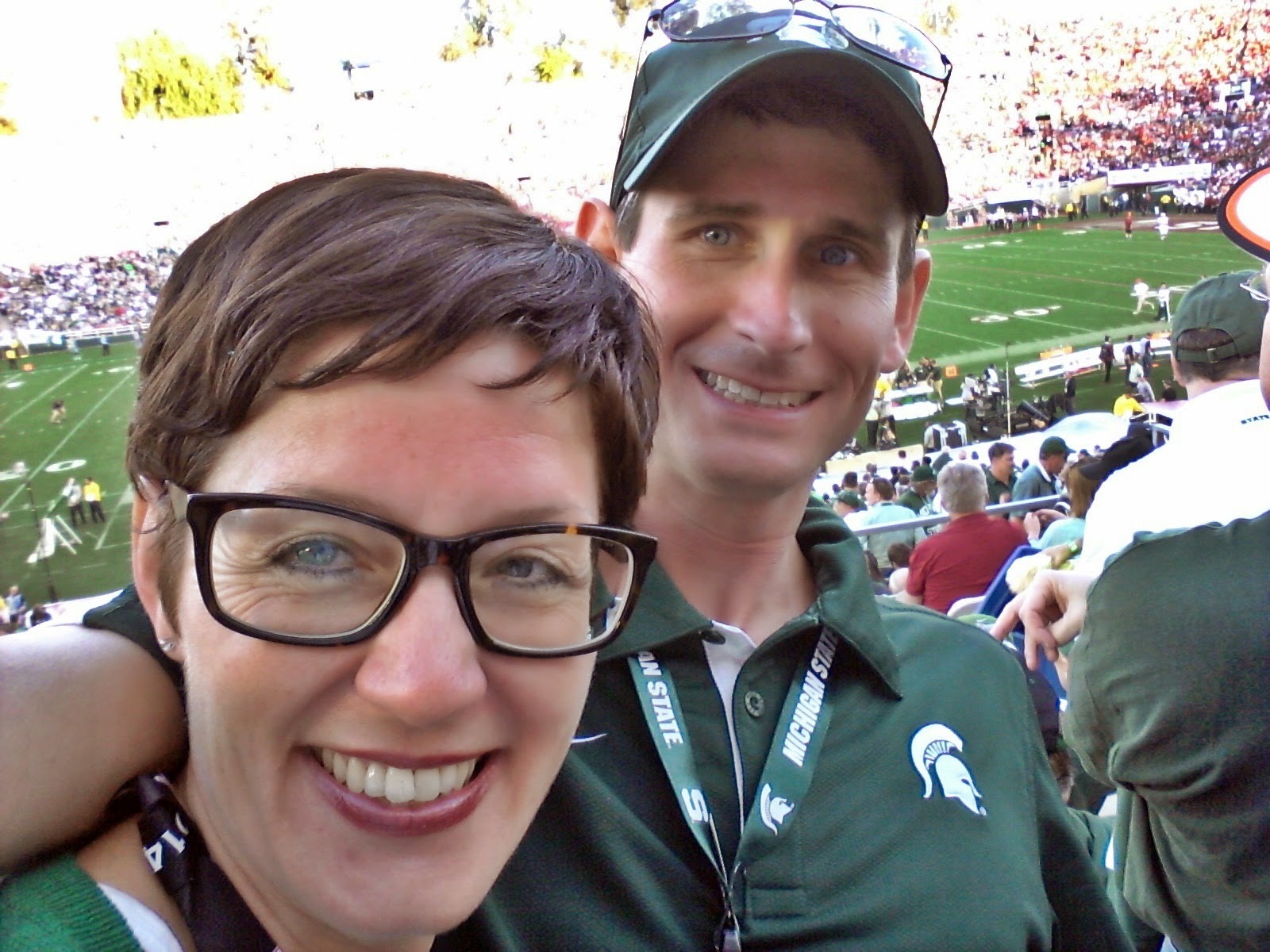