28 Hours in Our Nation's Capital

We'd been meaning to make the relatively short trip down to Washington, DC ever since we arrived in New York, just over a year ago.  The timing just never seemed to be quite right.  And then finally, a couple of weeks ago, the stars aligned.  As I flipped the calendar page, we had no plans for the upcoming weekend and some dear friends from our old San Francisco days who had moved to DC almost a decade ago confirmed that they too would be home and available that same weekend.  It was time to go!


As usual, we mulled over our mode of transportation for the trip.  We really wanted to take the train, but found it to be prohibitively expensive, costing reliably more than flying.  And flying wouldn't save us any time on a car trip that would take about 4 hours.  Besides, we'll do just about anything to avoid dealing with airports.  So we decided to drive.  We considered taking the easy route (for once) and renting a car right near our apartment, an option also known to be exorbitantly expensive.  But when we realized that our travel route would basically be taking us right through Newark anyway, we decided to splurge on an Uber to Newark Airport, where we rented a car for about $35 for the weekend - the whole thing still costing far less than renting a vehicle in our Manhattan neighborhood.

On Saturday, we rose at the crack of dawn and ordered our Uber.  At that early hour, it was smooth sailing to the airport and beyond.  We arrived in DC at 11:30 am, locating Janet and Mark's apartment and securing nearby street parking with ease.  And we still had the whole day ahead of us!

Although sunny for much of the drive, it was a chilly, late-winter day and the weather had turned cloudy (and depressing) as we drove through Baltimore.  While nothing truly unpleasant or out of the ordinary for the beginning of March, it was cold enough to make museum-going seem like the best plan for the afternoon.

After catching up for a bit with our hosts at their charming Adams-Morgan-neighborhood apartment, where we had last visited them in 2009, we set off to see some art.  We took the subway to the Hirsshorn Museum, which houses a rotating collection of modern art.


It was a short visit, as much of the museum was being prepped for an upcoming exhibition and as such, there wasn't that much too see.  Upon the enthusiastic (yet unsolicited) recommendation of a pair of friendly staff members, we proceeded to the basement to check out the "Suspended Animation" exhibit toward the end of our visit.  We were greeted by, and frankly a bit creeped out by, a dimly lit room containing a giant video screen, showing a video of an over-sized pair of bright pink, disembodied lips, speaking to us (speaking what, specifically, I cannot recall).  We quickly moved on to the next exhibit room, only to be confronted with a video of blueberries and a man's voice speaking about them, repeatedly saying the word "blueberries," among other things.  Janet and I found ourselves barely able to keep from laughing, as it was so odd and ridiculous-seeming.  We beat a hasty retreat before we could be too disruptive to the other patrons or just plain get thrown out and decided it was time to move on.  I guess I really don't get modern animation art.  I can live with that.

The one thing I really wanted to do on our trip was to see the National Gallery of Art, a branch of the Smithsonian American Art Museum.  Scott and I enjoyed a very brief visit to it while visiting my aunt many years earlier when she still lived in the DC Metro area and I had the urge to see it again.  We headed there next, first making our way through that museum's sculpture garden before entering the interior of the National Gallery.


Upon entering the museum, we made a bee-line for the cafe in order to relax with some beverages. While we sat enjoying our drinks, I was rather mesmerized by a fountain, located somewhere on an upper level, that was running down a large wall behind glass.  Due to my interest, Janet and Mark took us outside and showed us the top of the fountain on our way to the painting exhibits.


We paused near the fountain to take our first of many group selfies of the weekend. 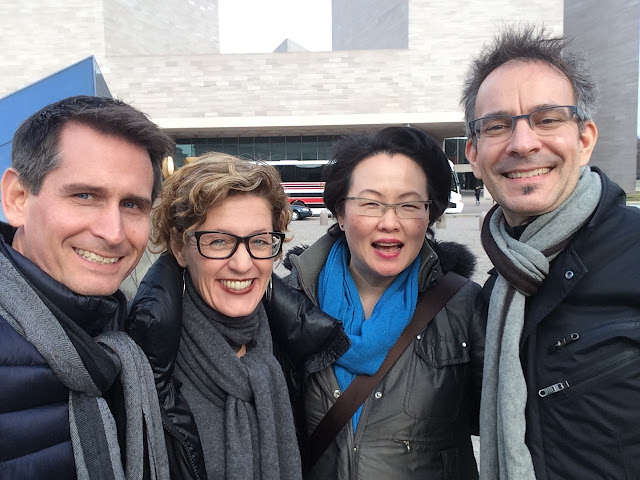 Janet also got a chance to show off her first-class photobombing skills, unbeknownst to Mark and me.


Now, I am really not much of an art museum kind of person, and while we have been doing a little more museum-visiting since we've been in NYC, Scott and I rarely visit art museums on our travels.  But I really enjoyed the few exhibit rooms we toured more than I ever thought I could or would.  In fact, what I saw of the National Gallery kind of puts the painting sections of the Metropolitan Museum of Art in New York to shame (although the Met has some really worthwhile non-painting exhibits).  The rooms we toured were full of wonderful, recognizable works from old masters such as Gauguin and Modigliani, to name just a couple of painters whose works I enjoyed.


I have always had fondness for medieval art and enjoyed studying it in an art history class I took one summer at Oakland University back in the early '90s.  The museum was preparing to close and we were on our way out when we walked by some rooms of medieval era works.  To satisfy my curiosity, we popped in for a quick look.  Imagine my surprise and delight when I happened upon the very work on which I had written my paper for that class I enjoyed oh, so long ago!


What an incredible treat and a wonderful way to end our afternoon of museum-going!


All that art-viewing had made us hungry and thirsty!  We continued our day with a happy-hour stop at a Peruvian Chinese fusion restaurant with which Janet and Mark were pleasantly acquainted, called China Chilcano.

The Pisco cocktails were top-notch, as was the food, and our hosts did an excellent job introducing us to a cuisine that I think would have been difficult to find even in NYC!

After enjoying cocktails and some amazing appetizers, we decided to go a little lower brow for dinner.  We chose a casual barbecue restaurant right around the corner from Janet and Mark's apartment.  The wait was long but we gave our name to the hostess and returned to the apartment, where we relaxed over a beautiful pinot noir, while waiting for our table.

Soon our table was ready and we enjoyed a delicious and inexpensive barbecue meal.  With full bellies, we ended the day with not one but two different varieties of pear brandy that Mark (my favorite aficionado of all things alcohol) happened to have sitting around.  I never realized pear brandy could be so good!  It was a perfect end to a perfect day and we all went to sleep, drowsy, happy and looking forward to tomorrow.

Sunday continued in much the same vein as the day before - an enjoyable blur of good food, drink, merriment and laughter.  After a leisurely morning enjoying coffee at the apartment, we ventured out for a delicious tea-smoked salmon brunch.

The Renwick Gallery, also a branch of the Smithsonian and hence free to all, had just re-opened after being closed for a major two-year renovation and Janet had been wanting to check it out.  At first, I was a bit skeptical of more museum-going, especially after ending on such a high note with our stellar visit to the National Gallery the day before.  But Janet made it sound pretty cool, so we figured what the heck and off we went!

When we arrived, the line was much shorter than our friends had feared and we were inside within a few minutes.

Wow, what a fabulous museum!!!  The gallery, located almost directly across the street from the White House, displays a series of large-scale American craft and decorative arts sculptures, each housed in its own room within the museum.  As we made our way through the crowded space, each exhibit was more intriguing than the last!

It was nearly impossible to pick a favorite, but I think we all really enjoyed the recreation of a Seattle area Hemlock tree, created out of a half-million segment of reclaimed cedar.

Or maybe this one, which I like to call "Insect Wallpaper."  Even the paint was created from insects!


While guests were requested not to touch anything, there were myriad opportunities to engage with the pieces by walking through and amongst them.  This created a very playful environment and we had a lot of fun photographing ourselves and one another interacting with the art and just generally being silly.

Despite the long lines within the museum, it was a wonderful couple of hours spent and I can't recommend a visit highly enough, should you find yourself in the DC area!

After leaving the gallery, we strolled past the White House just across the street. Despite the double row of albeit reasonably aesthetic fencing in place, the Presidential dwelling is currently much more visually accessible than it was on our last visit, probably around the time of George W. Bush's second inauguration in January of 2005.

The street directly in front of the White House is closed to traffic and a group of young men was making use of it playing hockey right out in front when we arrived at the museum.  The weather had turned a bit sunny and pleasant while we were inside the Renwick and we lingered in front of the Obama abode for a bit.  There, we indulged ourselves in further silliness, until it was time to return to the apartment to prepare for our journey back to NYC. 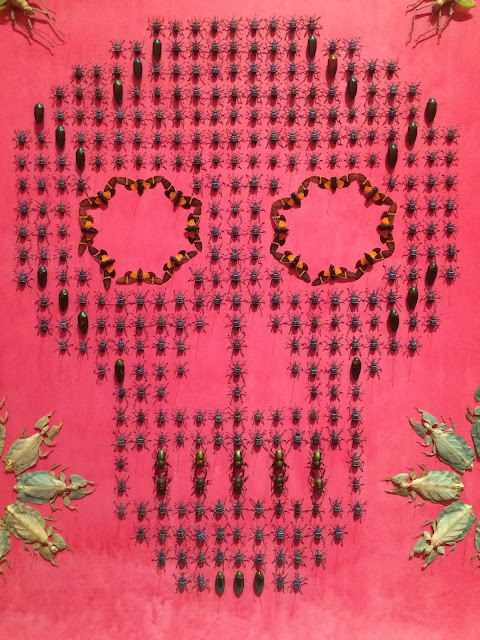 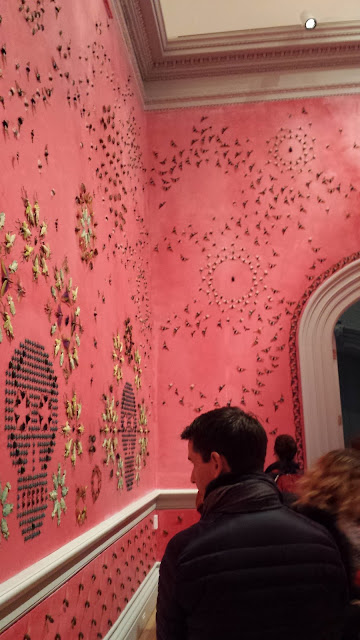 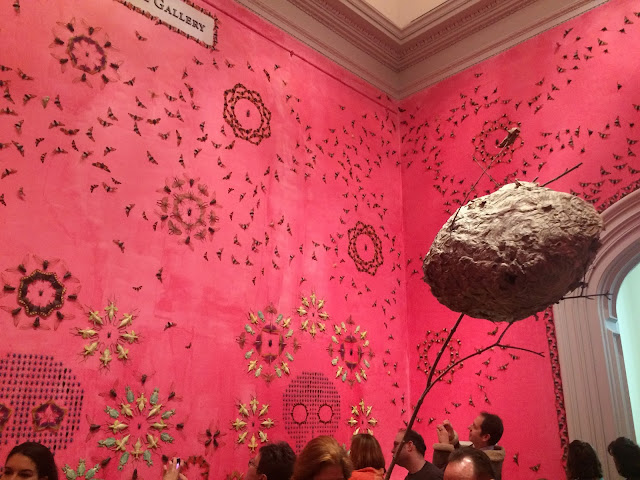 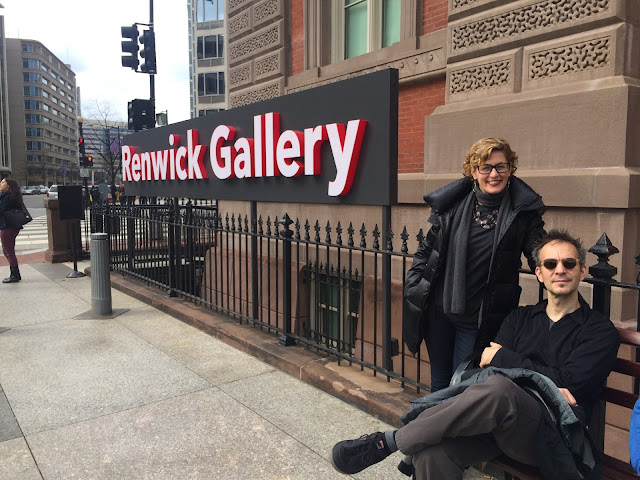