I spent much of the Shanghai-to-Osaka flight talking to Gao, a Chinese woman who has been living and working in Japan for many years.  She was extremely friendly and knowledgeable, and provided tips to help us enjoy our stay in Japan. Some we were able to use almost immediately upon landing – including how to say “excuse me” (I jotted down "smee mah sehm" phonetically, who knows if I was saying it right), and where to eat on our one evening in Osaka.
Gao further helped upon arrival, waiting for us near the train, helping us buy the right ticket (get the airport express train/subway transfer ticket for 10,000 yen!), and transfer at the right station.  Thanks Gao!


Getting off the subway at Higobashi station, it was a short walk down the pleasant Aji Riverfront to the Mitsui Garden Hotel.  Like our Shanghai hotel, we found everything to be clean, modern, and functional – not always the case during our time in Thailand or Myanmar.  The hotel also had traditional public baths on the top floor, and we were given a nice “how to” guide at the front desk so as not to embarrass ourselves or anyone else.

The bath would have to wait, first we needed to find food.  The neighborhood immediately surrounding our hotel was quiet and business-y.  While there were expensive, high-end restaurants nearby, we were looking for something a bit more casual and less involved on this travel day.  We decided to follow Gao’s advice, and head for the Dotonbori shopping and dining area, which was absolutely bustling with both tourists and locals on this Monday evening.  Walking there and back, we passed plenty of other cozy and convivial seeming restaurants and dining districts that we’d have loved to try if we had more than one night in Osaka.

The primary area of Dotonbori seems to be a collection of covered, open-air pedestrian-only shopping streets. I would describe it as an arcade, with very high and brightly lit ceilings and signage, almost reminiscent of Fremont Street in downtown Las Vegas (though not nearly as terrible as that).


Our first stop was going to have to be a Takoyaki stand – again, a Gao suggestion.  We ended up at Takoyaki Wanaka.  Takoyaki is a local specialty and I suspect guilty pleasure in Osaka.  Takoyaki is balls of batter filled with octopus and tempura scraps, basted with a sticky brown sauce, and topped with green onion, mayonnaise, seaweed flakes, and shavings of dried bonito (fish).  I loved these hot, sticky, doughy, savory lumps.  Caroline liked hers well enough - sans mayonnaise, of course - but wasn’t jonesin’ for more, as I was.


After walking and walking around, looking for a sit-down establishment where we could a) tell what the food was and b) that wasn’t ramen or a cook-your-own-food establishment (hot pot or shabu shabu), we were coming up empty. Let’s face it, Caroline had her heart set on sushi, as she had ever since she had a very happy sushi experience during our layover in Narita on the way back from Seoul in 2012.

After about thirty minutes blindly walking up and down streets filled with ramen and grilled meats, we eventually stumbled into a sushi place.  As soon as we stepped in to the traditional chorus of welcome from all of the employees, we could see that we were the only ones there – not a good sign for a sushi restaurant.  But they seemed to be very busily preparing food, and we were tired of searching, so we sat down and ordered ourselves some sake, beer, and sushi.  The friendly old sushi chef patiently took our order, and prepared us some very tasty nigiri and maki.  He even gave Caroline a fresh damp, hot towel when he saw her dabbing with futility at a large splotch of soy sauce that she had managed to deposit on her white shirt cuff. Caroline was satisfied – especially with her favorite of the night, the conger eel, but also with the thoughtful and attentive service from the sushi chef. 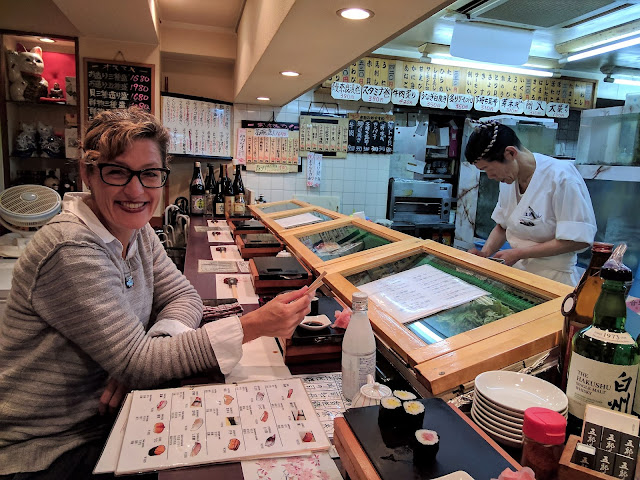 After our stroll back to the hotel down the charming streets of Osaka, I was ready to “figure out” the baths, while Caroline was ready to climb into bed.  These were public baths, so separate for men and women.  We’ll get to try it out together at our ryokan in Kyoto later.  After reading the dos and don’ts of the baths, I just wanted to get through the process without looking like too much of a rookie.

Scott's Steps for Japanese Bathing:
Overall, I felt clean, relaxed, and successful, and slept soundly in our comfy Mitsui Garden bed.  Tomorrow we catch the train for Kyoto, where we'll spend the rest of our short trip to Japan.
Posted by scott at 8:10 PM