After several busy days of sightseeing (and a lackluster shopping trip to the local outlet mall), based out of our characterless Hilton Garden Inn south of Poughkeepsie, it was time to relocate to the Catskills!

First though, on our drive to the mountain lodge we booked in Tannersville, we stopped off in New Paltz to check out the Historic Huguenot Street, settled by Huguenots from France and Belgium who were fleeing religious persecution back in the late 1600s.  The street consists of a reconstructed Huguenot church, churchyard and seven very old stone houses, thought to have been constructed by the Huguenots in the early 18th century. Unfortunately, we missed the last tour of the day, but we also just missed a rain-shower and were happy to be able to stroll the historic churchyard and small village sans umbrellas.


Excepting camping and vacation home rentals, there tends to be two types of accommodations in the Catskills: fussy (and very expensive) Victorian/antique-themed B&Bs and basic-bordering-on-rustic motels and/or cabins.  But in my extensive research, I came across a real gem of an inn. The Hotel Mountain Brook was styled as an updated mountain lodge. It consisted of a pair of shingled mountain cabin-style buildings and the Main Lodge was complimented by a gracious covered porch.


We booked a room in the East Lodge which was separate from the Main Lodge and had a small front deck with a rustic log railing, shared by 2 rooms. However, as there were few guests that early in the season the deck was basically private for us.


Our charming room had a birch bark-accented gas fireplace and birch log coat rack, in addition to antler accents (lamps and toilet paper holder) and (my favorite!) a moose-themed quilt with matching pillow shams.


The place had only been open for about two years so everything was in pristine condition.  It was mountain-y. It was modern.  It was perfect for us.  And we loved it!

Like at most of the B&Bs and small inns in the area, a full, home-cooked breakfast was included in our (not insubstantial) room rate at the Mountain Brook.  On our first morning there, after enjoying a hearty (to say the least) breakfast of coffee cake to start followed by thick-cut bacon, eggs and home fried potatoes (for Caroline) and completely decadent slabs of French toast (for Scott), we set off to hike to Kaaterskill Falls.  Our chatty innkeeper, Terrence, who doubled as the chef and server, was most forthcoming with maps and information about the reaching the trailhead.  Kaaterskill Falls seems to be the most popular attraction in the region and indeed it played a role in our decision of where to base ourselves in the Catskills.


Terrence mentioned that the trail sort of ends at one point and a sign indicates that people have fallen and died.  But, he assured us, he has done the trail with his small children and there is really nothing to worry about.


We found the trailhead with ease and enjoyed a lovely hike from the top to the bottom of the falls on a peaceful, wooded trail.


It had been very dry recently and so the falls were not exactly rushing but it was highly scenic all the same, with falls and pools at various levels.

At the bottom of the falls, after we'd had our fill of admiring the natural beauty before us, we began our ascent back to the parking lot.


But wait. Just where is the trail anyway???  It simply disappeared.  Before long, we found ourselves climbing through increasingly thick brush. Up the side of a mountain.  This wasn't the way we came!  And it surely was no longer fun!  It was steep and it was scary!  We were lost.


At the height of my "oh my God, where are we???" feeling of alarm, we ran into Ann and Bernard, a hearty, 70-something, British couple whom we had already encountered a couple of times at the Mountain Brook as well as at the waterfall.  They were lost as well.  Together, we attempted to orienteer our way back to the parking lot.  Eventually we found ourselves on the steep waterfall-side of the substantial  "trail ends, danger, keep out" log fence (oops!) and managed our way back to the car.


Thank  goodness for Scott and Bernard, or Ann and I would still be out there, wandering and lost in the woods, as I type this!  Bottom line: 1) I can't believe Terrence took his small kids on this hike and 2) even though the lack of trail was highly challenging, overall it was a beautiful hike and well worth braving the trouble spots.


The extreme humidity in the air over the past few days was indication that the rain would come sooner or later and sure enough, the moisture-laden clouds finally burst in a big way shortly after our hike to the falls.  But just prior to the cloudburst we managed to make the short 'hike' to take in the view from the site of the former grand old Catskill Mountain House hotel.  Sadly it was a bust and definitely not worth the $10 entrance fee, as it was so hazy we could see very little of the Hudson River Valley below.  On the bright side, at least the rain waited for us to get back to the car.  In the torrential downpour, we returned to the hotel to enjoy our grocery store deli counter picnic on the covered porch at the Main Lodge while watching our innkeepers lay sod in the rain.

The following day, after pancakes and pork belly, we chose another hike slightly further from our hotel.  The trail guide book back at the lodge described it as moderate, but you are probably already guessing that that is not how I would describe it.  We climbed up a very steep hill covered with large rocks through the warm, humid woods.


It was lovely but after yesterday's hike I wasn't really loving it.  The hike was called "Giant Ledge," so named for the series of lookout points at the top.  "Yeah, whatever," I grumpily thought to myself, as I huffed and puffed up the trail.  Well, after a grueling trek up the side of yet another mountain, we finally got to the top and walked a very short way off the trail to the first lookout ledge.  "Gasp!" Yes, I gasped, literally gasped, at what I saw before me.  Below me, the valley floor lay spread out for miles and miles, in various shades of lush green foliage and the sunlight was just right to be casting gorgeous shadows across the valley. It was truly breathtaking.

After the treacherous hike back down the mountain, we passed the remainder of the afternoon simply driving the small country roads, admiring the verdant hills, valleys, creeks and road-side waterfalls that make the Catskills the idyllic place that it is.

On Friday morning, it was time to check out of the Hotel Mountain Brook.  At the start of our trip we just weren't sure how or where we would feel like passing the final weekend of our nine-day vacation, so we left it open, not making a hotel reservation anywhere.  Big mistake. We had decided we wanted to stay in a creek-side cabin and sit in Adirondack chairs admiring the lovely Esopus Creek (or similar) for the remainder of our time. Long story short, that did not happen.  Instead, we ended up at an expensive, yet lackluster, motel in front of a dried up creek with a plastic-lined pool in partly cloudy, humid and rainy weather.


We did manage to salvage our final weekend with a relaxing kayak trip on the creek to the charming Saugerties Lighthouse and then to a waterfall.


The grand finale of our trip was a romantic al fresco dinner overlooking said waterfall from the top rather than the bottom of it this time, while dining amidst the horsey set, still in their jodhpurs, and admiring the prom-goers enjoying a far swankier prom than any I ever had the pleasure of attending!  Sadly, we failed to take any photos of this beautiful evening.


All in all, it was a fun and rewarding trip, allowing us to get the lay of the land north of the city and giving us an idea of what we'd like to see on future ventures out of the city. The downfall of such an action packed trip, of course, is that it wasn't nearly as relaxing as we would have liked. We're thinking our next major trip will likely be more Caribbean in nature. 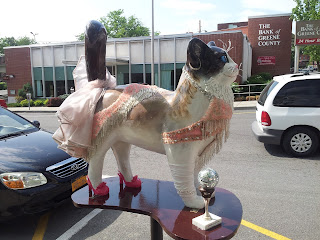 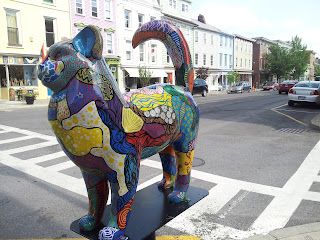 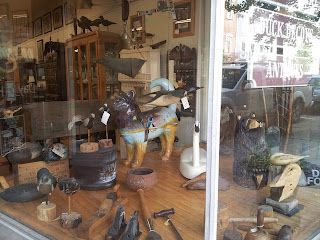 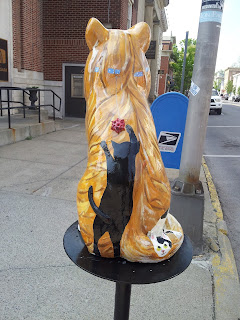 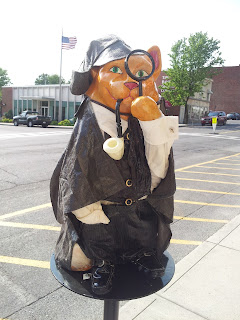 The painted cats of Catskill, NY
Posted by scott at 1:48 AM