After two completely lazy days of lounging around on the beach, we decided to take an organized tour out to Ang Thong National Marine Park, which is located about an hour-and-half's boat ride away from Ko Pha-Ngan.  Promptly at 8 AM, an enclosed, air-conditioned van (fancy!!) came to Pingchan Hotel to collect us and take us to the boat dock.

Once at the dock, we boarded the boat by climbing up a series of makeshift wooden gang planks and over the side onto the rather rickety-looking old, wooden boat.


We were the very first passengers to arrive on the boat, making for a relaxed and quiet beginning.  After settling in with coffee, water and breakfast snacks (all included in the tour price but which we didn't eat since we had just had breakfast at the hotel), we sat back to enjoy the ride.

After an hour-and-a-half, the boat stopped and we jumped (or crab-walked down the ladder, if your name is Caroline) off the back of the no-frills, old, wooden boat, for 45 minutes of snorkeling.


Although the fish were plentiful enough and quite pretty in their striped and iridescent scales, the waters were a little murky, so the snorkeling wasn't that great. We did see, at very close range, what may or may not have been a smallish (but still much larger than the other fish and sporting teeth) barracuda, if the young French tourist gal on our boat was to be believed (ha).  Barracudas aside, we were left feeling a little spoiled by our incredible snorkeling experience in Tahiti (Moorea, to be exact) and also extra motivated to book a room on Ko Tao, where Scott's old co-worker Jacqui, reported that there is excellent snorkeling right off the beach.

Back on the boat, we enjoyed a buffet lunch of Thai food, including green curry vegetables, an additional vegetable dish and tender, breaded, chicken saganna (or what we might call, chicken nuggets) - all totally delicious!


After lunch, we were herded onto several long-tail boats that shuttled us to Koh Mae Koh, a tiny beach that is part of the National Marine Park.

There, we took a short, but nearly vertical, hike to see the Emerald Lagoon. It was lovely, but I (Caroline) am not convinced it was worth the energy to get there.  Also, we were nervous to bring our phones on the small, long-tail boat, so we didn't even get a photo.

Our final stop of the day was at Koh Wua Talap Island, another island also part of the Marine Park.  Again, as our boat was too big to get close to the beach, we were transported by (i.e, packed into) long-tail shuttles to a pretty, sugar-white-sand beach, backed by lovely grassy areas, reminiscent, to me at least, of Hawaii.


After removing our hiking shoes and wading through the water to the beach, we embarked on a short - just 500 meters or 1500 feet - but very, very steep hike up a trail consisting almost entirely of stone steps cut into the side of the rocks.


It was hot.  I was dehydrated. I was out of shape from living in NYC for two years.  My legs were tired from the previous hike to the Emerald Lagoon.  Did I mention it was steep?  We were blessed with a little break on the trail to stop and gawk (and photograph, duh!) the wild monkeys that live in the park.  Apparently this was a rare sighting and we were lucky to witness these furry, marine park dwellers.


After the monkey stop, I soldiered on. With no little effort, I made it to the third viewpoint, a little more than half-way to the top, before I knew I was done.


I told Scott to go on without me and I began to make my way back down the way we had come, passing a German woman from our boat and her toddler, who was actually walking up the trail (but crying all the while, as I felt like doing as well).  Incidentally, Scott later reported that they made it to the top.  Yes, I felt like a wimp with a capital 'w.' Sigh...

On my way down the trail, I encountered more of the monkeys we had seen on the way up.  Now free of the crowds from our boat, as they were still all on their way to the lookout point at the top that I was missing out on, I prepared to take a selfie.  With the monkeys aligned in my shot and my finger hovering over the photo button, I suddenly felt a heavy thud on my right shoulder.  Immediately following the sensation, and before I really knew what had just happened, I saw the large monkey who had just used me as a springboard to get from the tree to the ground, sitting right in front of me, staring me down and looking rather combative.  For a moment I was scared witless, unsure if he planned to lunge and attack, perhaps contemplating taking a bite out of me.  Immediately, I broke eye contact and backed away.  Seemingly satisfied by his domination of me, he went on his merry way and assumed his position at the far end of the row of monkeys, with which I had planned to photograph myself, as if nothing at all had happened.  Although I was a bit shaken, priorities being what they are, I stayed to take a selfie with the four monkeys lined up behind me, before continuing back down the trail to the beach to wait for the others. 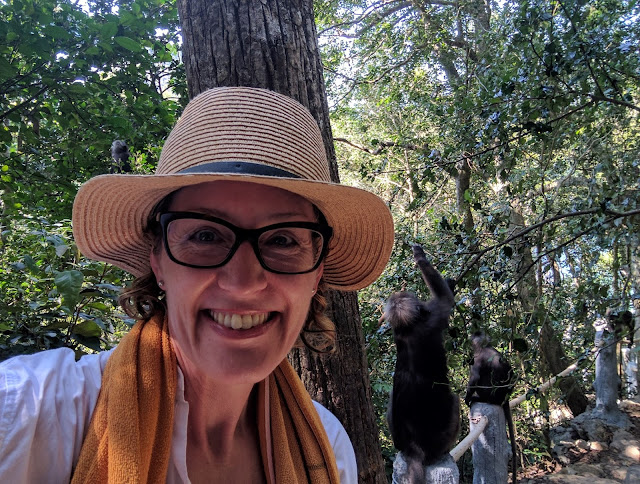 It was only later while perusing the photos on my phone that I learned that I had unwittingly taken a photo of said monkey's foot on my shoulder; apparently the pressure from the springboard action was enough for me to unintentionally hit the photo button.


While I was getting pounced upon by a wild monkey, Scott was enjoying the breathtaking view from the top of the mountain.


After I got my wits about me after the Great Wild Monkey Incident of 2017, I made it back to the bottom of the trail and enjoyed sitting at a picnic table in the shade, watching other daytrippers frolic in the clear and warm shallow waters of the beach.


The boat ride back to Ko Pha-Ngan was a low-key affair.  As they had earlier in the day, the crew members brought around large metal trays filled with sliced-up watermelon and pineapple - so juicy and delicious!


After our final afternoon snack of tuna sandwiches, many of our youthful, sunburned, and largely European, co-adventurers reclined on the benches for a disco nap before their likely attendance at the famous Full Moon Party back on the island the following evening. Scott and I simply enjoyed the quiet ride back to Ko Pha-Ngan, after what was, for us, a very full and active day. 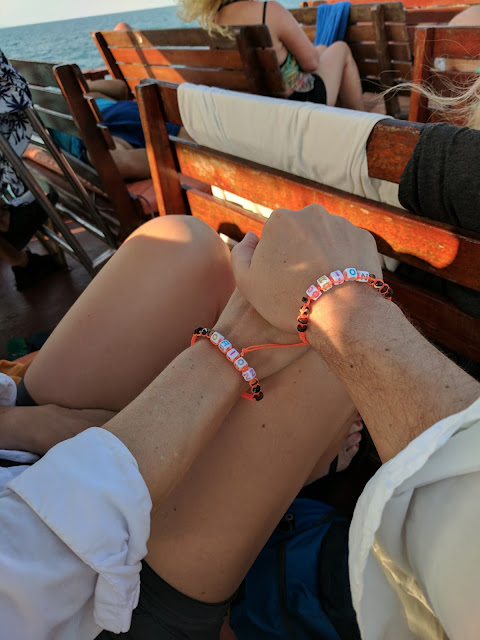 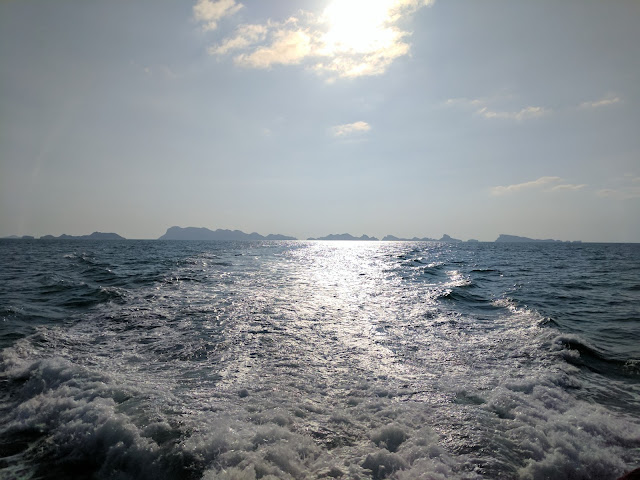 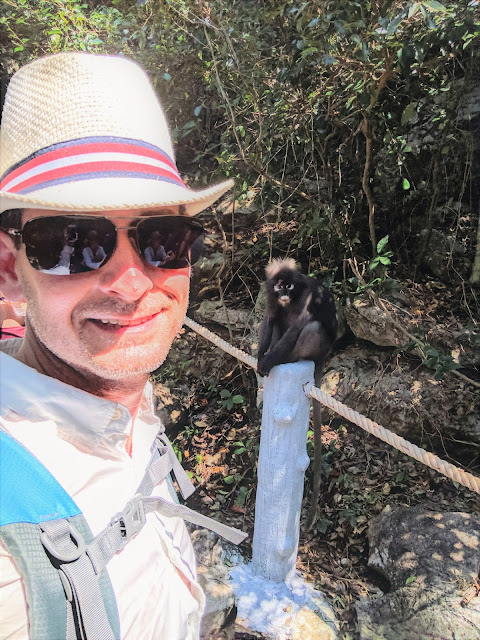