One thing about being "homeless" while traveling is that there's never any reason to wait to get home to do something - such as errands. Which means if you think you need a haircut, go find somewhere to get a haircuts. If you need to do laundry... you get the idea.

This can sometimes prove tricky, as you have no "go-to's" that you know you are reliable.  But, it almost always proves to be an interesting and sometimes rewarding experience.

I (Scott) had been putting off getting a haircut for weeks, with the busyness leading up to the move, so was pretty ready for a trip to the barber. Especially with temperatures in the high 90's, with high humidity. I popped into the old school-looking barber around the corner from our hotel, one of several we had passed in the neighborhood.


Between San Francisco, Mexico, and New York, I've gotten pretty used to getting my hair cut by people who don't share a common language with me, so was pretty sure this would be a smooth affair.  And photos on the wall that assured me I could look like an Asian pop star only enhanced my assurance: 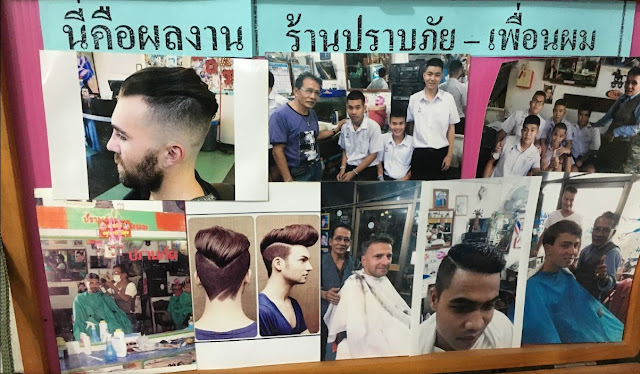 And while I was hoping to get the impressive coif at the bottom of the corkboard: 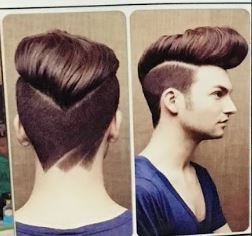 as a teenage client was getting right before me, I believe my barber decided I was not of a proper generation for such a flashy 'do.  All said, it was probably better than most haircuts I've had in New York, and at $2.85 USD including tip, was more than a tad cheaper.  Although walking around later, I realized I had been charged 50% more than at several other nearby shops, and probably could have saved $0.90.  No photos on this post of my actual haircut - but there are enough photos floating around the social networks that I'm sure most people I know have seen enough of my mug.

One errand accomplished, another necessity was to get some laundry done before leaving the city for a couple weeks at the beach.  Our very friendly and helpful staff at the Villa Phra Sumen Hotel recommended a place just across from my barber, and provided a map, the Thai spelling of the shop, and a note in Thai for the owner pointing out that we'd like same day service.  Even with this preparation, we still had a hard time finding the place - but luckily, the kindly proprietor found us.  And spoke the best English of anyone we'd yet encountered in Bangkok, so no need for written instructions.  Another $2.85 for our wash and fold to be delivered, same day, to the hotel - and again, probably charged about 50% more than other local shops. But laundry guy was just so darn friendly, I'm happy to send business his way.

Errands complete, we can move on to a well-deserved vacation to the beach!