Yangon - first impressions:
Everyone looks so different. From Thai people, from each other, and definitely from us.  The variety of cultural mix was evident the first time we walked out the door. India, China, Southeast Asia – it’s all there, everywhere we looked.

We made it nearly two blocks, to the Sule Pagoda roundabout, when we found ourselves just kind of stuck there.  Watching the people walk by, the trucks full of people in tribal outfits drive by.  Men, mostly in their traditional longyi (heavy, sarong-like wraps worn like long skirts) and chewing their betel nut, sat on tiny plastic stools and chairs, pulled up to tiny plastic tables (what we would call a dining set for the five-year-old-and-under crowd in the West) drinking tea poured from ubiquitous vacuum sealed carafes or aluminum tea kettles.

It was some time before we spotted another obvious Westerner.  They’re here, but it’s definitely no Thailand, and likely won’t be for a while.  Caroline immediately felt conspicuous in her shorts and tank top, selected due to the forecasted 100+ degree temps.


We spent our first morning tackling most of the Lonely Planet’s colonial architecture walking tour of downtown.  The buildings, like the people, seem to come from a vast array of both places and time.  The previous evening, on our cab ride from the airport to the hotel, the most obvious structures were the brand new, heavily lit ones.  We rode through a more affluent part of town east of Inya Lake, and passed by new banks, a brand new shopping mall with high-end western shops, and many new-looking cars along the route.

Once on our downtown tour, the steel and glass and signs for designer clothes disappeared.  Ramshackle buildings, side by side, with the occasional colonial beauty in between – most likely in need of some serious TLC.  We took way too many pictures of these photogenic buildings, many of which were astonishingly still in operation, even though they looked as if they were abandoned fifty years ago.  We also popped into the large, main post office along the way, where we picked up some post cards and stamps. 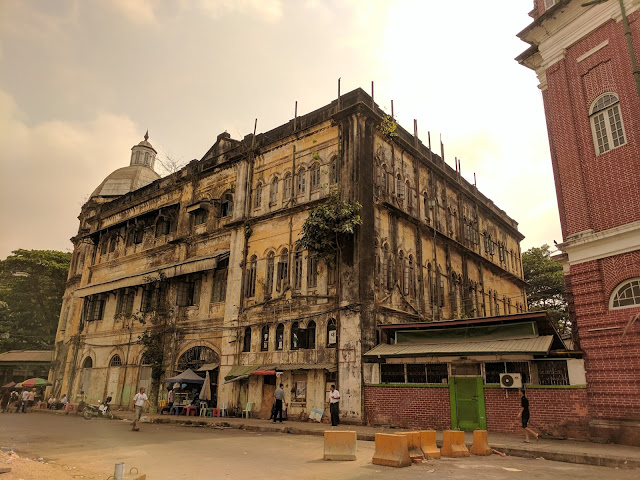 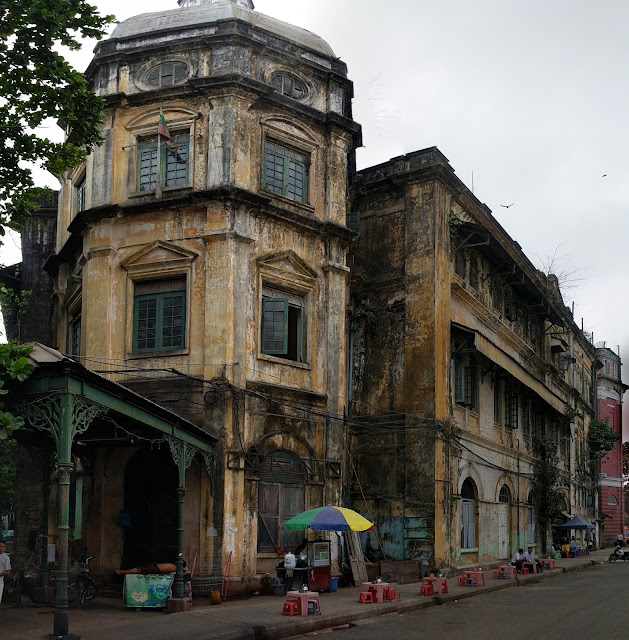 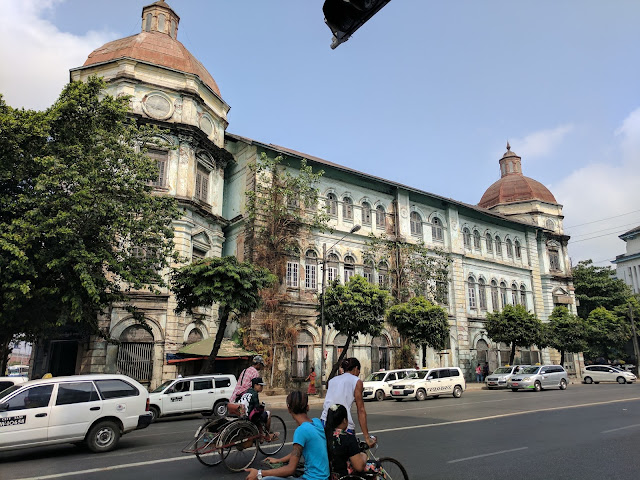 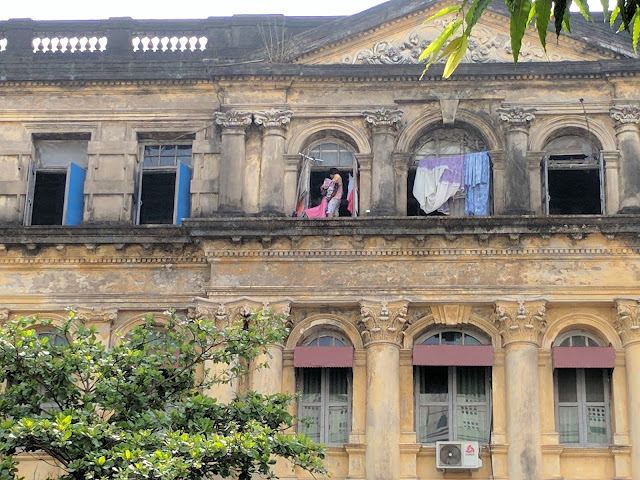 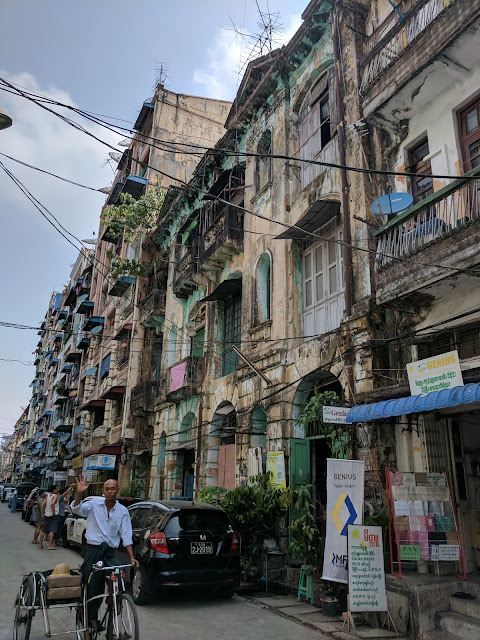 It was getting hotter and hotter, but we pushed on and made our way to one of the downtown markets.  We've been to plenty of markets, including in Thailand, but this one was something else.  The vendors mostly sat on the ground on blankets or straw mats, with their wares piled around them.  This included meat, chicken, and fish, in what would probably be considered unsanitary conditions by the standards of any market we've been to in Thailand, or in Mexico for that matter.  Again, the variety of people was fascinating.  Indian, Muslim, tribal people, most looking extra exotic with face paint on their cheeks. 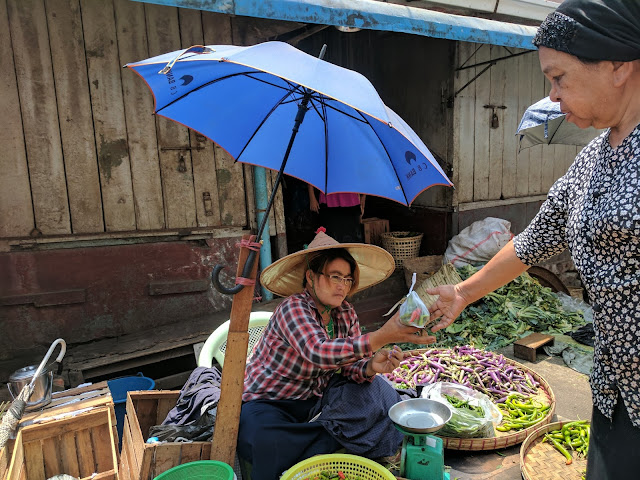 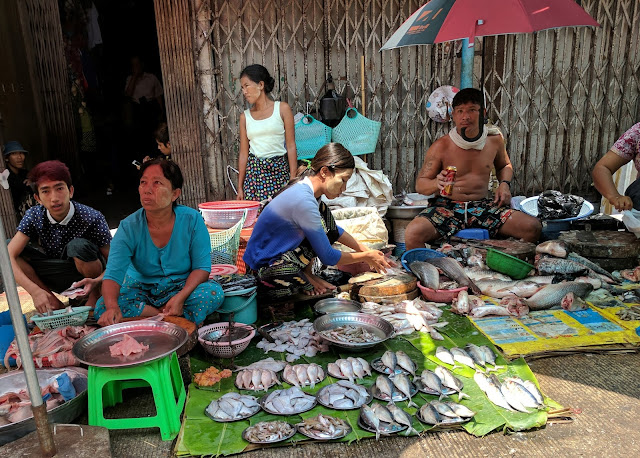 We knew coming in that the restaurant situation might be a challenge.  There would always be food – in the form of street stands – but nearly every restaurant shuts down for the better part of two weeks (some for three weeks) for Thingyan.  One of the restaurants on our list was the Rangoon Tea House. Scott spent quite a bit of time researching and contacting different places before setting off for Myanmar to find out if anything would be open.


Rangoon Tea House would be open, but only on our first day.  RTH is a modern, trendy-seeming place that caters to Asian and Western tourists, as well as affluent locals.  Our tea leaf salad and fried chicken bao was so good, we ended up going back to RTH for dinner – while we could, before they shut down for the Thingyan celebrations.  Well, that and we knew from the signs that they had a good happy hour and a tasty looking cocktail list.  Dinner of paratha, eggplant salad, and butterfish was delicious, and we were glad to have had the opportunity to go there twice. Not something we would normally do.

One final observation.  English!  We have been a bit taken aback by just how much English people seem to speak.  After spending so much time in northern Thailand, it was very noticeable at once.  Our taxi driver engaged us in conversation the whole way from the airport to the hotel, the hotel staff seemed conversational, and many people on the street love to say hello and ask us where we’re from. We’ll see how this holds up after leaving Yangon.