Mandalay had been scorchingly hot, so, like those soft British colonialists before us, we decided to increase our altitude and head for the hill station towns of Pyin Oo Lwin and Hsipaw to the northeast of the city.  Both are reachable by train from Mandalay.  The train from Mandalay to Pyin Oo Lwin, however departs at 4am, and takes four hours to work its way up the mountain, versus 1½ hours by car.  The second leg goes from POL to Hsipaw, crossing the Goktiek Viaduct; we definitely wanted to do this section by train and it is a six-hour journey by itself.  Unsurprisingly, we opted to travel to POL by car, spend the night there, and take the train the following morning to Hsipaw.

Our hotel in Mandalay, the Bagan King, arranged for a shared taxi to pick us up late Saturday morning, for around $4 per person.  We picked up our fellow passengers, a young mother and her very well-behaved baby, on the eastern outskirts of the city, giving me another opportunity to use some of my only Burmese – hkyac ca ya le (“cute”, pronounced "chess ee yah lee").

Arriving in Pyin Oo Lwin in early afternoon and checking into the colonial era Kandawgyi Hill Resort, we knew we'd have to get right to it, having only a half day to explore. The power went out almost immediately after we got to our room. In many parts of Myanmar, the nicer hotels like those us foreigners stay in all have generators, but won't turn them on until dusk to save on diesel.

We didn't linger in our dim room for long, arranging for a horse and buggy "taxi" that the town is renowned for to pick us up and give us an hour long tour.  Our driver and his young assistant were not the friendliest of Burmese that we'd encountered thus far, but knew the motions to go through and which sites we'd need to stop, get out, and photograph during the ride.

First stop, though, was the betel nut stand, where the driver had his assistant run across the street to fetch him his fix.

We rode by some historic homes, schools, and churches, with the coach occasionally stopping so the assistant could jump down and open our door, where we felt obliged to show interest and take photos at each site (some more interesting than others, at least one of which we couldn't even determine what the site was/why we were there).  The highlight of our tour was our stop at Candacraig - the now-abandoned colonial era British club built in 1904.  Apparently it's undergoing renovations to become a luxury hotel, but we saw no sign of construction.
Once our hour was up, we had ourselves dropped near a lakefront restaurant we thought we'd try for lunch and refreshments before heading over to the town's famous gardens.  I had the tasty Chinese pork "raviolis" in chili oil and a Myanmar beer, while Caroline went with sweet and sour chicken and Thai tea.  The restaurant had a nice setting on the lake, though wasn't the most atmospheric place in town, with a sort of chain restaurant feel and soundtrack of five Abba songs looping in the background. Nothing makes you feel like you're in Myanmar like Abba!
Lunch completed, we walked over to the national gardens of Pyin Oo Lwin.


Although it was supposed to rain, the clouds were disappearing, and by the time we reached the gardens, the sky was blue and the sun was shining, highlighting the colors of the beautifully manicured gardens.


There were plenty of Burmese tourists out as well, and many of the ladies were attired in beautiful dresses and hats as colorful as the gardens themselves.  Everyone seemed quite happy, and the gardens felt like one big, jolly selfie-shootout. 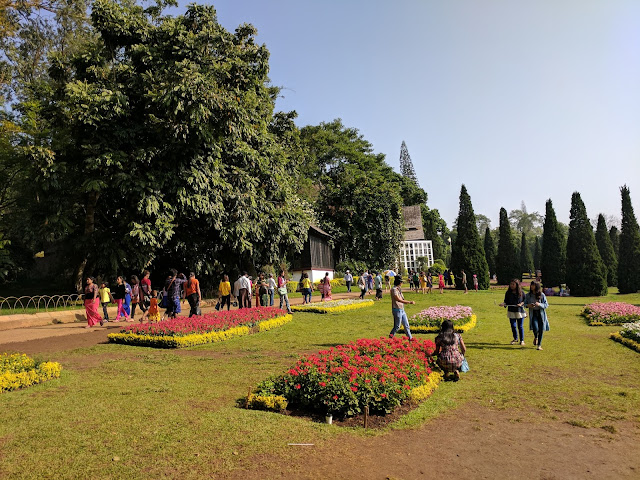 We stopped by the orchid garden (no orchids - all dead), then the walk-through aviary, which was really a nice setup displaying some beautifully colorful, exotic birds.  We walked through a bamboo forest, and attempted to photograph some takins, hooved animals which look part cow, part mountain goat, part buffalo.  We were also amongst the sites at the gardens, as the only western visitors there on this day.

Toured out for the day, we headed back to the hotel, stopping to take some (more) photos of the stunning sunset over the small lake across from the inn.


A quick change of clothes, and we were off for the night.  After such a busy day (for us) starting in Mandalay, we felt like staying close to our somewhat out-of-town hotel rather than hiring a horse carriage or car to take us to the town center. The upscale Pyin Oo Lwin Hotel was a short 10-minute walk down the street.  We sat ourselves at the bar of this virtually empty resort hotel, and passed a fun evening drinking an expensive bottle of cheap Ayuthaya white wine, and chatting with the bartenders who seemed to enjoy practicing their English and planning hypothetical trips to the US with us. A power outage added some excitement, and atmosphere, as the candles quickly came out.  They are prepared for outages around here.

Tomorrow morning, we head to the train station for our early train to Hsipaw.
Posted by scott at 6:48 PM