The Ancient Temples of Bagan

The cover photo of the Lonely Planet Myanmar, amongst other travel guides, pictures a hot air balloon floating over an endless landscape of ancient temple ruins at sunrise. The grandeur, mystery, and other-world-ness coaxing travelers to come explore. Few travelers who come to Myanmar, who aren't just visiting the big cities of Yangon and/or Mandalay, miss out on Bagan.  So it was obviously a requisite stop on our tour.


After securing our visas for Myanmar online before leaving New York, we did find out that we had planned our visit for the hottest, driest time of year - April.  The guidebooks have nothing good to say about visiting at this time of year.  Besides the difficulty of travel due to Thingyan, the heat in the cities and in Bagan can become unbearable at 105+ degrees Fahrenheit every day.  It's for this reason that the hot air balloons don't fly at this time of year, as you need cooler air than even the mornings can provide.  So we did miss out on the iconic balloon ride, and went into this trip a bit nervous about visiting, talking between ourselves of strategic early mornings, naps and pool visits.

As it turned out, we had arrived just at the start of a rainy, cool snap.  This would mean less strategy involved in our temple visiting, and also less pool time.  It also meant mostly overcast skies, which leant an interesting moodiness to the archaeological area, but also made it hard to photograph the landscape.

We didn't waste much time after checking into the boutique-y Areindmar Hotel in New Bagan, despite its lovely environs.


The recommended way to visit the temples is by bicycle or e-bike, with virtually all tourists choosing the e-bike to be able to most efficiently cover the large, spread-out archaeological zone.  There was an e-bike rental right across the street from our hotel.  Caroline had plenty of trepidation about operating one by herself, but was willing to give it a try.  The rental shop operator gave her a 3-second tutorial and had her ride down the street and back.  Caroline was so unfamiliar with the operation of a motor-powered two-wheeled machine that she didn't know which way to turn the throttle grip to make it go.  The test did not go well.  After successfully heading 30 or 40 feet down the gravely dirt road, she attempted to turn around.  With too many things to focus on, she forgot to let go of the throttle while making the U-turn, causing her to tip the e-bike over onto her leg and foot.  She got quite a scrape, and we got one e-bike for the two of us to ride.


Thingyan was still a thing on our first couple of days in Bagan, and no sooner did we set off on our e-bike did we get doused by some local revelers throwing buckets of water at the passing traffic.  After getting a Thingyan soaking, I thought that getting caught by rain showers seemed less daunting, and Caroline decided she was totally over Thingyan.

The next three days were spent exploring many, many temples.  Unsurprisingly, we enjoyed the slightly less grand and more out-of-the way sites for the peacefulness their lack of crowds provided.  The bigger, more popular sites also had an abundance of vendors at each temple, aggressively trying to sell sand paintings, jewelry, clothes and handicrafts, providing yet another reason we tended to avoid the most popular sites.


Especially when we were able to avoid the vendors and crowds, it really was an amazing experience to lurk around through the long, dimly lit, high-ceilinged hallways of the 800+ year old pagodas.


It was also fun to climb up to the top through narrow stone stairways in order to see the stunning surroundings spread out below.

We did manage to drag ourselves out one morning to watch a sunrise, treacherously climbing a "lesser" pagoda where we sat with six other western tourists while the sun apparently rose (it was so cloudy it wasn't all that dramatic).
Some of the most fun we had during our Bagan visit was feeling very popular due to our minority status as white westerners.  We were approached repeatedly by Burmese tourists, many likely from rural areas where they don't encounter people like us, to take photos, selfies, and sometimes just to say hello and ask where we're from.  They are frequently shy, lingering around us holding their cameras until they find the courage (or are invited by us) to snap a photo.  One young woman ran up to Caroline as we were walking away from a pagoda and slipped a homemade scrunchie onto her wrist, saying "present!" before running off.  We'd love to see a collage of all of the selfies that were taken with us.  We managed a few selfies of our own, and some photos of our "fans." 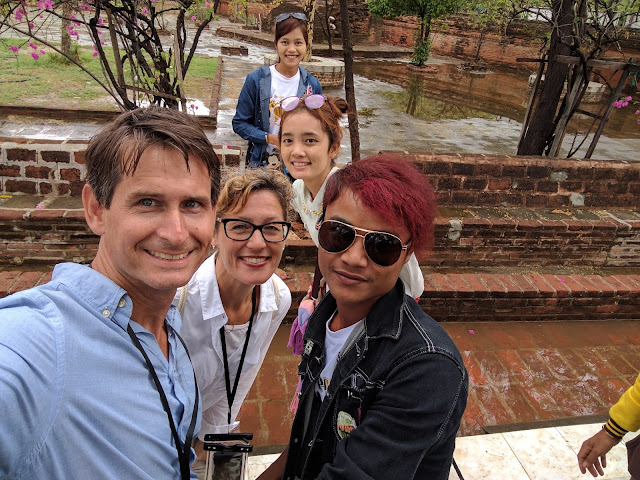 The sun did manage to come out on our last day, and we had a really nice time heading to the east side of the archaeological zone from our west side hotel location.


We stopped for lunch in a very local teahouse in Nyaung U, the only town of any real size near Bagan.  This is where we discovered Shan noodles... mmmm!  Much more edible than the tasty - but incredibly spicy, even for me - tomato salad I ordered our first evening at Mingalarbar Food Corner near our hotel. I think there were probably tomato chunks in it somewhere, buried amongst the chilies.

We also ate a couple of times at a restaurant along the Ayeyarwady River, where Caroline found some sweet and sour chicken she just had to have twice.


Bagan was a really wonderful experience, despite the dust (then the mud that came with the rain), lack of hot air balloons and absence of picturesque sunrises and sunsets.  It's really apparent that you're at a significant archaeological site - and despite some spots being crowded, it's amazing how alone you can find yourself, wandering amongst the temples.


Next up, a short flight to Heho (still no buses due to Thingyan!), with a taxi transfer to the mountain town of Kalaw.


Dhammayan Gyi - An Exterior View and Some Interior Shots of One of Our Favorite Temples: 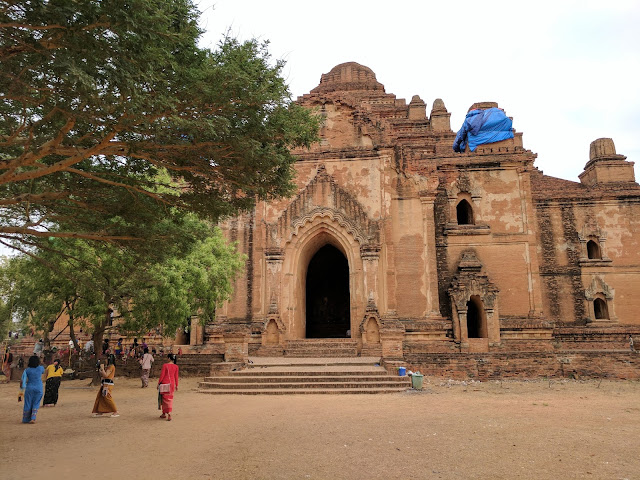 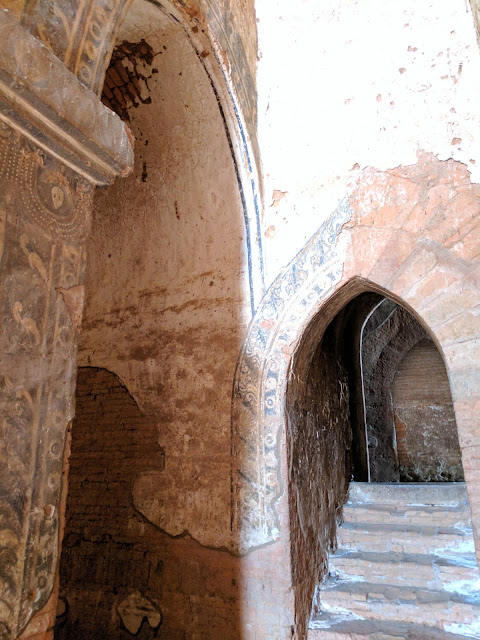 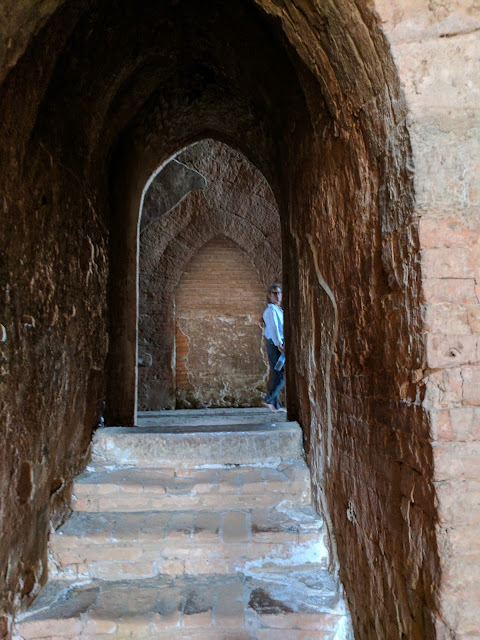 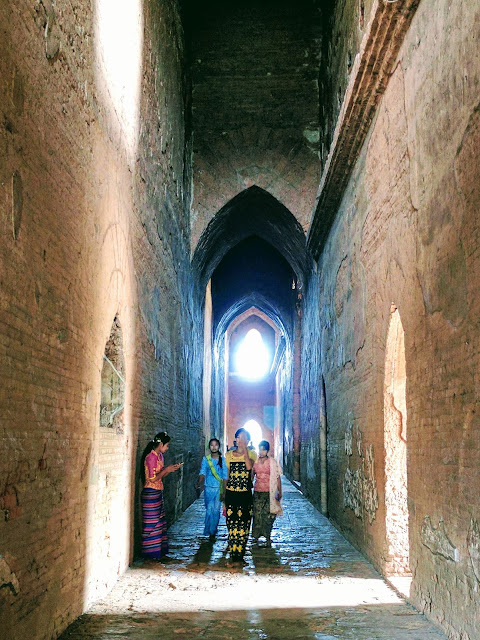 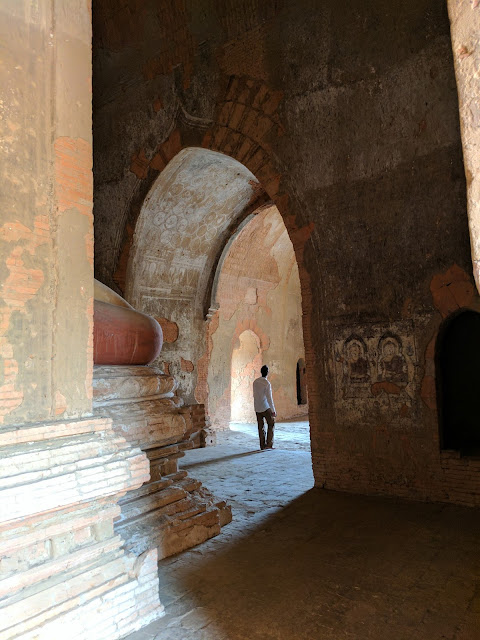 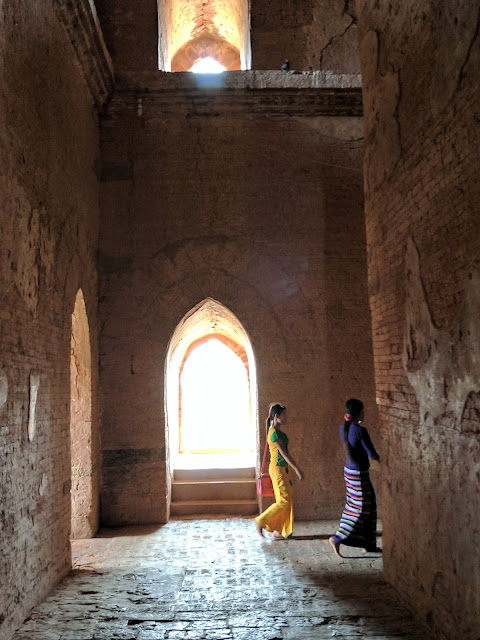 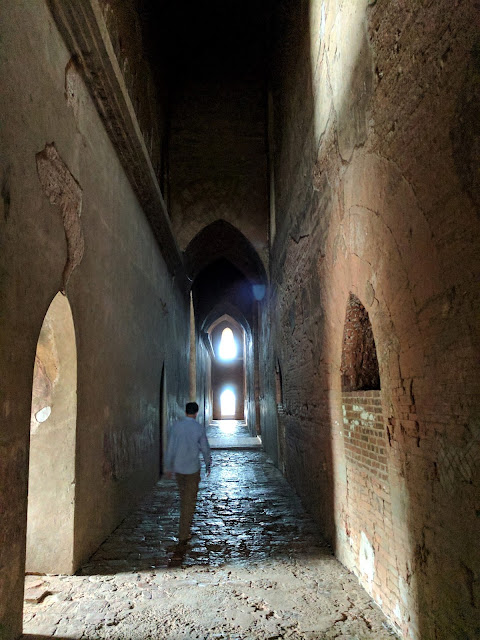 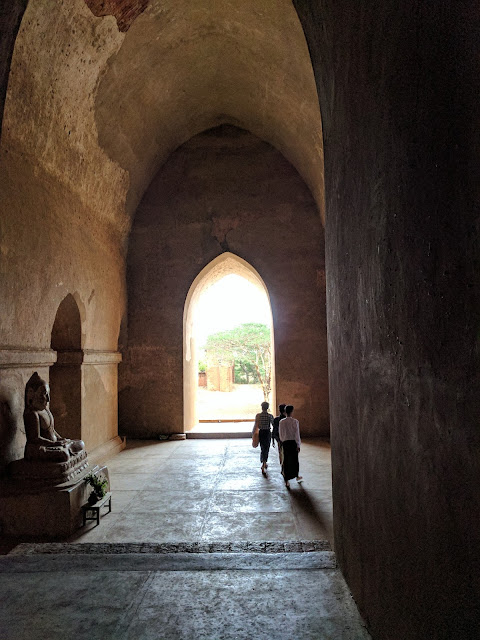